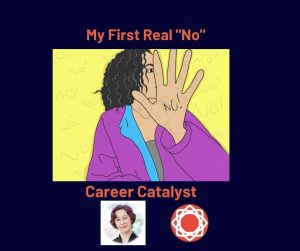 The first real job offer I turned down was terrifying.

I was fresh back from Japan, and had realized through my time there that I didn’t want to teach—the thing I’ d clung to as a possible career all through college and my 3 years on the Japan Exchange & Teaching Program.  So in my confused state, I flung my net much too wide, and wound up interviewing for a position selling life insurance.

I know, I know: What was I thinking?  I hate hard-core sales, I do poorly in corporate structures, cold-calling leaves me feeling slimy and gross, and here I was, interviewing for a position that requires all those things.

The weirdest part is that the guy I interviewed with adored me  He thought my jokes were hilarious, treated each answer I gave like it was a profound pearl of wisdom, and generally nodded so enthusiastically I thought he’d hurt his neck.  He wanted to hire me almost as much as I didn’t want the job.  When I completed the interview, I stood in front of the bathroom mirror for ages and variously introduced myself as an insurance person, and I couldn’t get it to feel anything other than awful.  My stomach hurt, and my attempts at smiles looked terrifying.  It looked a bit like I was offering to eat your child.  I tried saying it every which way, and keeping the parts of the job I did like in mind—for instance, this particular insurance agent who interviewed me worked almost exclusively with people from other countries, navigating US insurance for the first time ever.  But I just couldn’t make the unhappy belly and horrible grimaces go away.

Insurance, of course, isn’t an inherently awful profession, but it clearly also isn’t my profession.  I couldn’t get it to fit no matter how I sliced it, even though I liked the idea of customizing things for individuals, determining each person’s needs, and helping to create a safety net.  I just didn’t want to do the other parts of the job.

So I said no when he called to offer me the job.  He offered me increasingly high signing bonuses, too, but I thought back to that version of me trying to smile in the mirror when I said “I sell insurance” and I just knew I had to keep saying no.

I don’t want to make it sound like that was easy.  I really felt awful for interviewing and then saying no.  I felt like I should want the job, and I felt like the poor guy had wasted his time on me.  I was guilty and terrified that that would be my only job offer ever.  I was sweating and trembling, and my stomach was in knots almost as bad as the ones I felt when I imagined myself doing the job.  I can’t remember for sure, but I may even finally have lied to him, claiming a better offer elsewhere.  I definitely created that scenario as a fallback, even if I didn’t actually use it.  I just knew that I couldn’t possibly be me and do that job.

And you know what? I don’t regret it in the least!  I had to work really hard to get where I am today, but I love what I do.  I can be my quirky-ass self and get clients who are on my wavelength.  I can dye my hair purple or magenta and still do my job.  I don’t have any quotas to meet, and I’m not constantly striving for some carrot of a reward that isn’t even something I value.  I am me and I love the work I do.

So say no when you need to.  Be you.  Life will be better for it, I promise.

Video: Addressing employment gaps
October 9, 2020
Schedule an Appointment
Subscribe to Blog via Email
Go to Top
We are so happy you’re ready to start! We’d love to meet you first however, and request you sign up for a free evaluation setup: