Help, I hate my job!

This is something I hear all too often from my clients.  By the time most of us are uncomfortable enough to take action, things on the work front are pretty grim.  They’re stressed all the time, Mondays feel like poison, and they have to sit in the parking lot and talk themselves into those last few steps.  If this sounds like you, this week is dedicated to you. 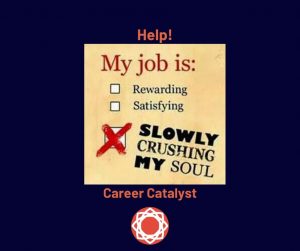 The first thing to do is understand that you are not alone.  This happens to many people, and for a variety of reasons.  I know a few people who never liked their jobs and it’s just gotten worse over time.  What happened to me what that my previous office hired two very toxic people and it quickly became unsustainable.  Some of my clients have simply grown out of jobs, and some have undergone restructuring that makes the role not fit anymore.  Whatever the reason, please don’t feel like you did something to deserve this. You played your role, of course, but nobody deserves to spend 40 hours a week hating what they’re doing.

Step one in your escape plan is identifying the problem.  It may be one or two people, or maybe it’s the tasks or the paycheck.  Whatever the primary root of the problem is, identify it and tell your loved ones.  This can be harder to do than it sounds, so if you’re finding it a challenge, start by identifying when you started to feel unhappy, and what (if anything) changed around then.  You should be able to identify some key factors, so jot those down and spend time thinking what the most important piece is.

Next, the hard part: think about how you have contributed to the problems.  In my example above, the toxic people proved contagious (this is often the case) and I found myself going down that same path.  Poison at work often breeds poison, and for me, the only real way out was to cut the strings completely.  So, without blaming yourself, what did you do that wasn’t constructive in the situation?  Are you someone who has been told you don’t “read” people well?  Do you become slapdash in your work when you’re under too much pressure?  Did your role change a lot and you suddenly found yourself complaining about every little thing?  It’s important to understand these behaviors because they will inform you as you move on.

Third, if you can, take some time off and think about what’s next.  The time off is important if you can get it because you will get that tiny bit of distance and the bit of space to think.  But even if you’ve maxed out your PTO, spend some of your next day off really thinking about how you can fill the employment gap.  What soft of job would give you enough income to live on and feel okay for the short-term?  (You will probably have to trim your budget for a little while, so think about what you really need in order to survive, not what you’re currently making.)  Then brainstorm some things you can do.  Become a barista?  Deliver food people order?  Pick out groceries for people who don’t have the time or inclination to shop?  Walk dogs?  Get creative, and think of this next step as a short-term job that will get you to where you’re going next.  This will be a safe and easy landing spot that allows you to think about your next move, so think about it in those terms.

On Thursday, we’ll talk about surviving in this job until you can make a move to the next thing.

Gee, thanks…
January 15, 2021
Schedule an Appointment
Subscribe to Blog via Email
Go to Top
We are so happy you’re ready to start! We’d love to meet you first however, and request you sign up for a free evaluation setup: