Will we have a recession? And what will it mean for you? 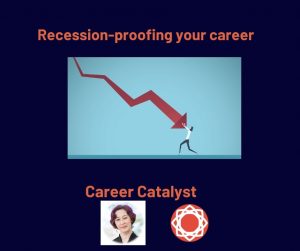 To answer the first question, there’s actually a surprising amount of disagreement among the folks who study this stuff.  Some Forbes writers argue that, with unemployment numbers so catastrophically high, even a speedy recovery would push us into a recession.  Meanwhile, the Harvard Business Review notes key paths to a severe downturn that it seems unlikely we will meet.

But for most of us, the more important issue is how jobs will be impacted, regardless.  The good news is that there are still employers hiring, some at high rates, just as was the case in 2008-2009, when our last recession was in full swing.  There may not be as many choices for job-seekers, but that doesn’t mean you will spend the rest of your career (or even the next 8 months) as a greeter at Walmart, either.  If you need something quickly, look at lists of who’s hiring, remote work options, and even side gigs to add extra income.

If you’re currently employed, you can start planning against a recession by doing things like paying down debt, trimming some less important expenses, and funneling more of your hard-earned money into your reserves.

To build towards a more recession-proof career path, you can do some things starting right away, whether you have a job or not.  The first thing to do is to examine your current or most recent job.  Don’t get stuck thinking about the title, though.  Regardless of whether there’s a recession or not, hiring will likely look a little different in the shorter term, so think instead about the value you add to an organization.  Job titles often change when times are hard, but that doesn’t mean your contributions need to, as well.  If you’re currently working in a role you’d like to keep, be sure you’re demonstrating to your managers who your values align with the company’s, and demonstrate as much flexibility as possible.

You’ll also want to be networking as much as you can.  Building and maintaining those solid connections, in good times as well as bad, will help you hear about new openings early, stay on top of hiring trends, and remind people of the contributions you make at organizations.  Help others as much as you seek help, which will let you avoid the creepy feeling of using other people in order to get ahead.

Finally, if you have the mental and emotional capacity right now, list some skills you think you need for your career path, and see if there are free ways to gain those.  Good options include Coursera’s free classes, Google’s Digital Garage, Kahn Academy, and the free one-month trial of LinkedIn Learning.  You can find free courses on Thinkific and Udemy, too.

But What If I’m Still Confused?
June 1, 2020
Schedule an Appointment
Subscribe to Blog via Email
Go to Top
We are so happy you’re ready to start! We’d love to meet you first however, and request you sign up for a free evaluation setup: