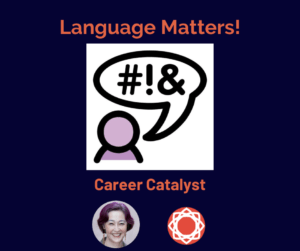 Did you see the video of Lauren Boebert (sorry, she’s from my state) reading the Bible passage about “wonton killing”?  The phrase, of course, is wanton killing, meaning, in this case, deliberate and unprovoked—not, in fact, filled dumplings, as tasty as those are.

But it made me think about how often I see resumes and cover letters with words or phrases used incorrectly or awkwardly.  We don’t have much choice when we’re asked to read certain things out loud, but when you’re writing your own resume, you have a lot of power to choose the language you use, and it’s always the better idea to opt for the word you’re sure you know instead of the synonym you found online.  So often, the synonym is just off so the whole document becomes a tiny bit wrong.  When that happens, many hiring managers will assume you don’t know English particularly well, and in some cases, that can mean they aren’t going to call you for an interview.

Now, I use the synonym feature in Word pretty often, but I would never choose a replacement unless I was absolutely sure of its literal meaning and its typical use.  For example, when I search synonyms for “counsel,” I get a lot of choices that simply aren’t quite right.  I don’t really advise people.  I don’t guide or instruct or direct.  Those words are all pretty close, but they’re also not quite right.  What that winds up meaning for me and my CV is that there’s some necessary repetition because there’s truly just the one primary word for what I do.  (Okay, yes, I also educate people, but only in specific areas.)

It’s even worse in some cover letters.  If you’ve ever been part of a hiring committee, you know what I mean.  Some cover letters are so thesaurus-dependent that they become almost meaningless.  They become the definition of purple prose:

In literary criticism, purple prose is prose text that is so ornate or flowery as to disrupt a narrative flow by drawing undesirable attention to an extravagant style of writing as it diminishes appreciation of the discourse or story overall. Purple prose is characterized by the excessive use of adjectives, adverbs, and metaphors. (Wikipedia)

From the practical standpoint of those making hiring decisions, this sort of language is extremely frustrating to read.  What does it even mean?  Can you do the things I need the person in this role to do?  What the heck IS your experience?

So when you’re writing your resume and cover letter, remember the eternal wisdom of Henry David Thoreau: “Simplicity, simplicity, simplicity!”  Or, as William Stunk, co-author of the still-classic Elements of Style puts it, “Vigorous writing is concise.”  Be vigorous and concise.  Your readers will appreciate it, and will probably want to interview you.

Subscribe to Blog via Email
Go to Top
We are so happy you’re ready to start! We’d love to meet you first however, and request you sign up for a free evaluation setup: