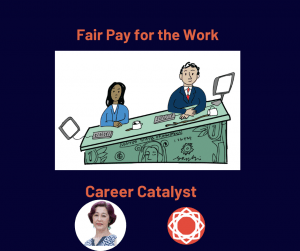 You probably know about pay inequity: men get paid more than women for the same job, and White people get paid more than Black and Latinx people, and on and on.  It’s a frustrating fact, but knowing it means that we can take action on it.  One of the best things you can do is learn to negotiate your salary, but we’ll dive into that tomorrow.

Today we’ll look at how to handle salary questions in an interview or application so you are in a good place to negotiate when you do get an offer.  The first thing to know, and great news for the pay gap, is that an increasing number of states and cities have laws that forbid an employer from asking about your salary history.  This is an incredibly important step, because many people have gotten trapped in poorly-paid positions simply because that’s what their history reflected.  If yours isn’t one of the states listed, write to your state’s lawmakers!  You should never be stuck in low-paying positions because you accepted one when you were young.

Another thing you can do is actively seek employers who have pay transparency measures in place.  Of course, you’re unlikely to find a list of these employers (I’ve tried!), but some research will get you started, and you can ask about it in your interviews.  (Don’t overthink it—just say something like, “Equity is very important to me.  What steps has your company taken around pay transparency and nondiscrimination?”)  Many employers won’t have a full answer to that question, but you’re really looking for evidence that they’ve given the matter some thought, or are simply willing to discuss it.

You can also seek these places by doing networking, asking those questions before you apply for jobs.  This is an especially powerful step if you’ve faced discrimination because of your name, because it lets you get information at the start of your career plan, and it lets you get known to people who make decisions about who gets hired.

This won’t answer all the issues of discrimination, of course, and I don’t mean to add this to the already-huge burdens marginalized folks are already carrying, but it is to say that there are some steps that are within our power, even when systems are unfair.  (And from there we can look at changing those unfair system!)

Losing Your Job Part 4: Resume & Social Media Updates
August 6, 2020
Schedule an Appointment
Subscribe to Blog via Email
Go to Top
We are so happy you’re ready to start! We’d love to meet you first however, and request you sign up for a free evaluation setup: