Finding Where You Fit 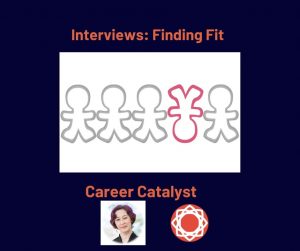 Remember that an interview goes both ways.  You’re interviewing them as much as they’re interviewing you.  It can be hard to keep that in mind when you feel desperate for a job, but it’ still true, even then.

One of the worst possible outcomes of an interview can be a bad-fit job.  Most of you have probably already experienced at least one of those.  If you follow my posts regularly, you know about the miserable law firm job I had once upon a time, but what I haven’t told you is how I forced myself to feel excited about that job and to sound like a good fit.

The background here is that my mother, my career role model in my early life, had always worked in law firms.  She had the power suit and the ass-kicking stilettos and the whole 9 yards, so in my mind, that was what work looked like.  I’d spent time teaching English in Japan, but I didn’t want to teach, and that was the only other type of work environment I could really envision, so when I interviewed at the law firm, I answered their questions the way I thought my mother would.  It was a translation job, of course, so I talked about the importance of accuracy and that sort of thing, as well, which I actually did believe in, but the rest of it was not a real reflection of me at work.  Unfortunately, I was young enough that I didn’t know who I was at work.

When they offered me the job, I accepted it without negotiating the salary or benefits (another mistake) and felt pretty dang good about myself.  For a little while.  But the job was a terrible fit for me, and the people who worked there were the kind of crazy I don’t like.  One of the Japanese guys there was a Promise Keeper, for crying out loud.  (Several of the White guys were as well, a further reflection that I didn’t belong there, but it didn’t wig me out the same way as the Japanese evangelical Christian dude.)

With the benefit of hindsight, I can easily see the kinds of questions I should have asked.  When the braggart partner there told me that he’d been part of the original IUD lawsuit, for instance, I should have asked him which side he represented.  I should have asked a lot about the firm’s values and culture.  I should have asked what was going to happen to the translators at the end of the lawsuit.  I should have asked how success was measured.  And I sure as hell should have negotiated my crummy salary and benefits!  But I didn’t do any of that, and I wound up keeping company with a guy who had his wife iron his jeans.  To paraphrase Catherine Aird, since I can’t be a good example, at least let me be a horrible warning.

Changing Careers
October 12, 2020
Schedule an Appointment
Subscribe to Blog via Email
Go to Top
We are so happy you’re ready to start! We’d love to meet you first however, and request you sign up for a free evaluation setup: