Don’t hit on people in LinkedIn. 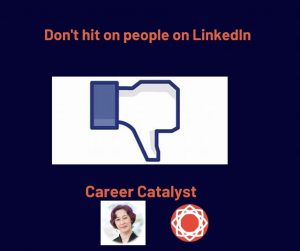 You would think this goes without saying, but, alas, I have been hit on twice online, and both times were on LI.  (I ignore or delete these messages, but frankly it feels quite creepy.)  LinkedIn is very much a place of work, and if these 2 dudes were my clients, I would have firmly (but supportively) chastised them both for failing to read the room, as it were.  There’s no relationship status on that platform for a reason.  Now, it’s not really appropriate to hit on people on other platforms, but at least on Facebook you can sort of see why it might happen, if your status is set to single.  (Still, if you’re tempted, don’t do it.  And if you don’t want it done to you, maybe change that sucker to “it’s complicated.”)

This is part of why I advise a little bit of healthy lurking in social media spaces.  When you know what the behavioral norms are, you will have a better idea of how to behave, yourself.

But don’t hit on people.  I’m never on social media hoping someone notices that I have “pretty eyes.”

Your skills checklist
June 25, 2020
Schedule an Appointment
Subscribe to Blog via Email
Go to Top
We are so happy you’re ready to start! We’d love to meet you first however, and request you sign up for a free evaluation setup: